Jimmy Page had a fascination with the poet, novelist, artist, occultist and founder of Thelema, Aleister Crowley. He pressed Crowley's motto "Do What Thou Wilt" (along with "So Mote Be It" on the reverse side), into their album, Led Zeppelin III, and he bought Crowley's rural retreat, 'Boleskine House'. When their untitled fourth album was released, there were some interpretations of the song "Stairway To Heaven" that claimed it had satanic reverse-audio messages in the verse 'If there's a bustle in your hedgerow'.

Jimmy Page was commissioned to write the soundtrack music for another Crowley admirer, Kenneth Anger's film Lucifer Rising, but eventually the project was shelved. Bootlegs of the project exist and are highly prized and admired by Jimmy Page fans.

The introduction to Led Zeppelin's "In the Evening" is said to be taken from the unfinished soundtrack, most of which was recorded by running a guitar through a synthesizer.

What made people particularly curious about Jimmy Page's connection with the occult was the appearance of four symbols on the jacket of Led Zeppelin's fourth album. It was generally accepted that the four symbols represented each member of the band.

During tours and performances after the release of Led Zeppelin IV, he often had zodiac symbols embroidered on his clothes (those of Capricorn, Scorpio and Cancer which are probably his Sun, Ascendant and Moon signs, respectively) along with the so-called "ZoSo" symbol.

This fuelled the curiosity of many fans who went to great lengths to find out what the symbols meant.

While still a student, Page would often jam on stage at the Marquee with bands such as the Cyril Davis All Stars, Alexis Korner's Blues Incorporated and with guitarists Jeff Beck and Eric Clapton. He was spotted one night by John Gibb of The Silhouettes, who asked him to help record a number of singles for EMI, including "The Worrying Kind". It wasn't until an offer from Mike Leander from Decca Records that Page was to receive regular studio work.

His first session for the label was the recording "Diamonds" by Jet Harris & Tony Meehan which went to Number 1 on the singles chart in early 1963.

After brief stints with Carter-Lewis and the Southerners, Mike Hurst's group, and Mickey Finn and the Blue Men, Page committed himself to full-time session work. His studio output in 1964 included Marianne Faithfull's "As Tears Go By", The Nashville Teens' "Tobacco Road", the Rolling Stones' "Heart of Stone" (alternate version), Van Morrison & Them's "Baby Please Don't Go" and "Here Comes The Night", Dave Berry's "The Crying Game" and "My Baby Left Me", and Brenda Lee's "Is It True".

Under the auspices of producer Shel Talmy, Page contributed to The Kinks' 1964 debut album (although, despite rumors to the contrary, he did not play any of the guitar solos); and he sat in on the sessions for The Who's first single "I Can't Explain" (although his guitar parts may not appear on the final mix).

In 1965, Page was hired by Rolling Stones manager Andrew Loog Oldham to act as house producer and A&R man for the newly-formed Immediate Records label, which also allowed him to play on tracks by John Mayall, Nico, Chris Farlowe and Eric Clapton. Page also formed a brief songwriting partnership with then romantic interest, Jackie DeShannon.

Page was invited to replace Eric Clapton in the Yardbirds on March 20, 1965, but was unwilling to give up his lucrative solo career, and instead suggested his friend Jeff Beck. On May 16, 1966, drummer Keith Moon, bass player John Paul Jones, keyboardist Nicky Hopkins, Jeff Beck and Page recorded "Beck's Bolero" in London's IBC Studios.

The experience gave Page an idea to form a band with John Entwistle on bass (instead of Jones), however the lack of a quality vocalist and contractual problems brought the project to a halt.

Within weeks, Page was again offered a spot in the Yardbirds and at first played bass guitar with the group after the departure of Paul Samwell-Smith, before finally switching to twin lead guitar with Beck when Chris Dreja moved to bass.

The musical potential of the line-up however was scuttled by interpersonal conflicts caused by constant touring and a lack of commercial success. Despite the departure of Keith Relf and Jim McCarty in 1968, Page wished to continue the group with a new line-up.

After Keith Moon heard that Keith Relf and Jim McCarty left the band, and that Page wanted to continue it, he insisted the band was going to "go down like a lead zeppelin", hence the band's new name, Led Zeppelin. 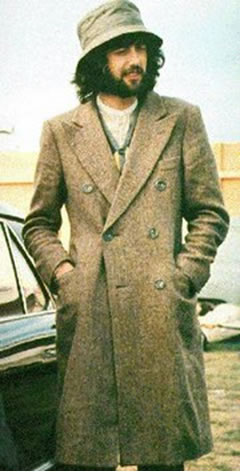 Jimmy Page's past experiences both in the studio and with the Yardbirds were very influential in the success of Led Zeppelin in the 1970s. As a producer, composer, and guitarist for the band, he was one of the major driving forces behind the rock sound of that era, with his trademark Gibson Les Paul guitar and Marshall amplification. In the studio, Jimmy Page often used a Supro amplifier and a Telecaster guitar.

His use of distorted fuzz guitar ("Whole Lotta Love"), slide guitar ("You Shook Me", "In My Time of Dying"), pedal steel guitar ("Your Time is Gonna Come", "Tangerine"), acoustic guitar ("Gallows Pole", "Ramble On") and recording techniques made Led Zeppelin a prototype for many future rock bands.

His landmark guitar solo from the song "Heartbreaker" has been credited by Eddie Van Halen as the inspiration for his trademark two-hand tapping technique after he saw Led Zeppelin perform at the LA Forum in 1972. (Jimmy Page's solo does not itself contain any two-hand tapping.)

Page also put to use his bowed playing technique he developed during his session days (but note that Eddie Phillips of Creation - also produced by Shel Talmy - was the first guitarist to use a violin bow), and experimented with feedback devices and a theremin.

His guitar solo in the famous rock song "Stairway to Heaven" was voted by readers of Guitar World Magazine as the greatest guitar solo of all time.

Led Zeppelin disbanded in 1980 following the death of the band's drummer John Bonham. After reportedly not picking up a guitar for the next two years, Page attempted to form a supergroup with ex-Yes members Chris Squire and Alan White, to be called XYZ, but it came to nothing.

He made a successful return to the stage with the ARMS (Action Research for Multiple Sclerosis) charity series of concerts in 1983 which honoured Small Faces bass player Ronnie Lane, who suffered from the disease. Jimmy Page then linked up with Roy Harper for an album and occasional concerts, performing a predominantly acoustic set at folk festivals under various guises such as the MacGregors, and Themselves.

In 1984, Jimmy Page recorded with Plant as the Honeydrippers. Various other projects soon followed such as The Firm, with Paul Rodgers, session work for Graham Nash, Box of Frogs, and Robert Plant, a solo album Outrider, a collaboration with David Coverdale in Coverdale-Page, and a live album and tour with the Black Crowes.

In addition, he also collaborated with director Michael Winner to record the Death Wish II and subsequent Death Wish 3 soundtrack, released in 1982 and 1985.Led Zeppelin reformed in 1985 for the Live Aid concert with Phil Collins and Tony Thompson on drums replacing Bonham.

The band considered their performance to be sub-standard however, and were one of the few Live Aid acts to refuse permission for their segment to be included in the 20th anniversary DVD release of the concert.

In 1994, Page reunited with Plant for the penultimate performance in MTV's "Unplugged" series. The 90-minute special, dubbed Unledded premiered to the highest ratings in MTV's history. The session was released in 1995 as the CD No Quarter: Jimmy Page and Robert Plant Unledded, and in 2004 as the DVD No Quarter Unledded.

Following a highly successful 1995 tour, to support No Quarter, Page and Plant recorded Walking into Clarksdale, their first new album together since 1979. Jimmy Page has been one member of Led Zeppelin who has always left open the option for a group reunion.

Since 1990, Page has been heavily involved in remastering the entire Led Zeppelin back catalogue and is currently participating in various charity concerts and charity work, particularly the Action for Brazil's Children Trust (ABC Trust), founded by his wife Jimena Gomez-Paratcha in 1998.

In 2005, Page was awarded the Order of the British Empire in recognition of his Brazilian charity work, and was also made an honorary citizen of Rio de Janeiro later that year. His daughter, Scarlet Page, is a respected photographer.

In 1998, rap singer/producer Sean "Puffy" Combs (now known as "Diddy") adapted Led Zeppelin's "Kashmir" for a new song that he was contributing to the movie Godzilla. The song was recorded in two different studios via satellite link-up, with Combs singing in New York City and Page playing guitar in London. The end result was "Come With Me". Combs and Page later performed the song live, with a rock band and full symphony orchestra, on Saturday Night Live.

This collaboration between one of the innovators of rock 'n' roll and a rapper some consider greedy and untalented, was not well received or regarded by many Led Zeppelin fans; many others, however, found Combs' adaption more respectful of the original song than its critics thought, and also pointed out that Page's participation constituted a full endorsement of Combs' adaption by the veteran guitarist/producer.


This article is licensed under the GNU Free Documentation License. It uses material from the Wikipedia article "Jimmy Page".
Copyright www.electricguitarz.com 2006-2014